Ocean Renewable Power Co, (ORPC) is a Portland, Maine based company that is positively impacting people’s lives and their environments, using river and tidal energy as a way to provide renewable energy solutions. With the recent launch of their first commercial product, the RivGen Power System, ORPC is helping provide energy to remote communities allowing them to reduce their dependence on expensive and environmentally unfriendly diesel fuel. We recently caught up with ORPC CEO & Co-Founder, Chris Sauer and President John Ferland to talk about the impact of the deployment of the RivGen Power System, their path to success, and ORPC’s future. 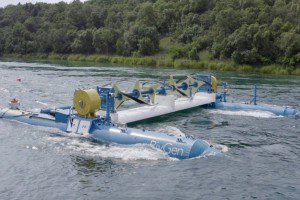 RivGen® device on station at project site prior to deployment

The 15-year-old Portland, Maine based company began their journey in 2004 by seeking to find a way to generate electricity from water currents in oceans and rivers without using dams, in a way that would not damage the environment, but realized that the technology that they imagined did not yet exist. With the help of the Carderock Division of the Naval Surface Warfare Center consulting on their technology, ORPC developed the turbine generator unit (or, TGU) using cross-flow turbine technology, which allows the turbine to turn no matter which direction water flows. The turbines always rotate in the same direction, eliminating the need to reposition the unit. A second major revelation for the company was that they could build TGUs with a low vertical profile, making them ideal to be deployed in shallower river depths. This innovation allowed ORPC to pivot from working in the oceans to being able to deploy their technology in rivers. 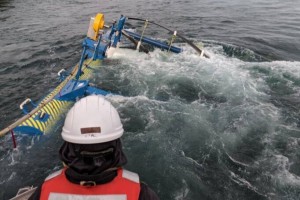 In July 2019, ORPC saw the launch and deployment of its RivGen Power System in the Kvichak River in Alaska.  By generating emission-free electricity from river currents and connecting directly into existing the community grid using smart grid technology, the RivGen Power System has brought power to the remote Alaskan village of Igiugig that will significantly offset their dependency on diesel fuel.

ORPC believes that through the development of their renewable technologies, that they can contribute in a beneficial way to the health of the environment and the local communities they work with, while also bringing positive social and economic impact as well. After 12 deployments of the RivGen System and extensive monitoring by third parties, no negative effects on the environment or wildlife have been documented. To date, there has been no occurrence of fish mortalities or sediment transfer. Additionally, all state and federal agencies have signed off on the RivGen System as being safe and environmentally viable. Deploying the RivGen System in rural areas has allowed ORPC to stimulate the economies of these communities on many levels by hiring local labor, fishing vessels, and using local materials. 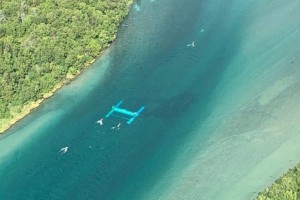 RivGen® device deployed and operating in the Kvichak River, Alaska

Along the road to commercialization, ORPC participated in the USDA Commercialization Assistance Program in 2015. It was through this program that ORPC had the opportunity to utilize Larta Institute’s mentorship program. “I thought it was well done,” said John Ferland, “our advisor, Rob Dullien was experienced, and a level-headed straight shooter who gave good guidance. We developed a good relationship.” While ORPC had embarked on strengthening its market research efforts and defining its commercial pathway for the RivGen, “working with Larta helped make it more formal through test-driving ideas.” When CEO Chris Sauer reflected on ORPC’s journey to success he recalls, “at the time USDA awarded us, it was a critical time for us in our development, we were short on money. The whole process that we went through with Larta, it was one of those nice things that happened that really helped us. Sometimes these kinds of programs get lost in the shuffle as you become successful, but we didn’t forget it.” For companies working their way toward commercialization Sauer offers advice on what it takes to succeed. “You have to be incredibly patient and persevere. You have to strongly believe in your concept.” He also reminds fellow entrepreneurs that “the market is not going to come to you. You always need to know your market.”

We further explored with them how their journey on the investment side has ranged from family office to foundation involvement. “Serendipity” is a word that Sauer likes to use when discussing key investments that have not only helped ORPC in the beginning but also look forward to a bright future. Early investment from friends, family, and investors got things going early on for ORPC, but many other “serendipitous” investments have come along the way in years since, through government grants and private sector investment. Especially of note are two significant recent fundraising successes for ORPC. On Nov. 1, 2019, the Department of Energy awarded ORPC a grant of $3,875,859 to help further develop its RivGen system, and less than a week later the company secured commitments of $7.5 million in additional private investment that will allow ORPC to expand its business development and sales further in the United States, Canada, and Chile.

“Eventually we’ll be all over the world, I hope as common as iPhones,” says Sauer. He sees many opportunities worldwide but stresses that ORPC’s growth in the market will be strategic and focused on one part of the world at a time. He adds, “our RivGen technologies would be a perfect fit for many communities in Africa that have no power, that sit close to rivers, that’s in the future, but we need to remain disciplined in our approach to the market.”

Most importantly, ORPC is paving the way for these communities to gain more control over their own energy destiny and taking them away from high diesel prices, noise, and emissions. Sauer points out how developing intimate relationships with the communities they work with is crucial. “We don’t go into communities to tell them what we are going to do. We go in and talk to them, explain our ideas, and get their input. They buy-in. It has become our competitive advantage.”

0
Ag Showcase 2020: Save the Date!
This is the most recent story