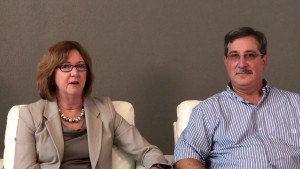 “The agriculture world is looking for technology to maintain the effectiveness of biotech crops because, in the face of climate change and all these other challenges, we have to maintain that high level of productivity,” said Sharon Berberich, ag industry veteran and Ag Innovation Showcase advisor, in an interview with Silicon Prairie News.

Sharon Berberich established a 25 year career for herself in AgTech with senior positions at Monsanto, DowAgrosciences, Danforth Science Center, and Kaiima and now she finds herself at the helm of Plastomics, a startup using chloroplast engineering to develop the next generation of high performing crops.

While at and in transition for her senior level positions, Sharon has been a long-time veteran of the Ag Innovation Showcase. Under her guidance, SomaDetect and NanoGuard Technologies won the “Ideas, Energized” and “People’s Choice” awards at showcase, respectively. Now with extensive experience in running AgTech R&D programs as well as mentoring startups, Sharon has started her own.

In the next 10 years, global food consumption will increase to 50%. The planet needs to find a way to increase its overall food production in a way that doesn’t further contribute to environmental problems. Plastomics has a solution: engineering plant chloroplasts. The chloroplast is where plants convert sunlight and carbon dioxide into energy for the plant. Plastomics’ chloroplast engineering is a platform that can efficiently introduce multiple traits into the chloroplast and enable simple breeding of traits, such as insect resistance and drought tolerance.

Founded in December of last year by Jeff Staub, Sharon joined this February. Just recently the company has managed to secure seed round funding, led by BioGenerator and The Yield Lab. The funds will be used to set up tobacco, soy and corn platforms and to create proof of concept products.