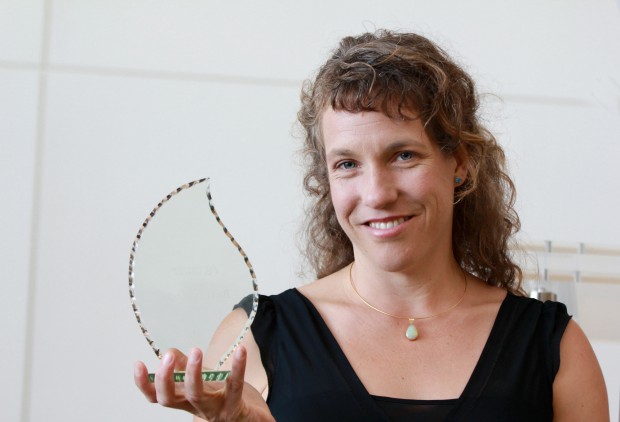 This feature post is from our partners at Larta Institute.

Whole Trees, a company that rebrands round timber for urban and commercial environments in place of steel, won the 2015 Best-in-Show award among 20 presenting companies at this year’s Ag Innovation Showcase, September 16th. Co-owned by Amelia Swan Baxter and Roald Gundersen, Whole Trees is also a USDA SBIR Phase II grant recipient which has been through Larta’s 2014-2015 commercialization acceleration program, USDA CATP.

Five judges from the Ag Showcase’s Advisory Committee judged each company on the clarity of their presentation and ability to connect with their audience, the soundness of the business plan presented, and the level of freshness their product brought to the ag industry.

“We haven’t had a Best-in-Show award at the showcase for several years. It was the right time to bring it back,” says Larta CEO and event co-producer, Rohit Shukla. “We’ve been seeing other industries jump into ag, such as IT and life sciences, but this was the first year we started seeing ag companies jump industry lines to offer ag in other industries, such as architecture, and the garment industry,” he said, referring to Whole Trees and Stony Creek Colors.

The 20 showcase companies arrived mid-September at Ag Innovation Showcase armed with presentations, props, core-board posters, brochures, and for one entrepreneur – an orange juice machine. Entrepreneurs from Israel, Netherlands, New Zealand, Canada and the US, gathered at the showcase to mingle with the ag industry’s deal makers, investors and partners, and ultimately showcase their products for 10 minutes to an audience that mattered greatly to the forward motion of their companies.

Handpicked from 150 applications, this year’s group of innovators was the cream that floated to the top in the areas of Biologicals, Precision Ag, Farming Innovations, and Renewables & Sustainables. Each product was impressive and peaked interest.

Possibly, the most interesting business approaches and innovations came from companies in Renewables & Sustainables, simply because this group looked at the business of ag in new ways and were hopping over industry lines, bringing ag to other industries. It was also the group that was dominated by women-owned business. Four out of six companies were women owned.

To win among such innovative peers is quite an accomplishment. Congratulations, Whole Trees!